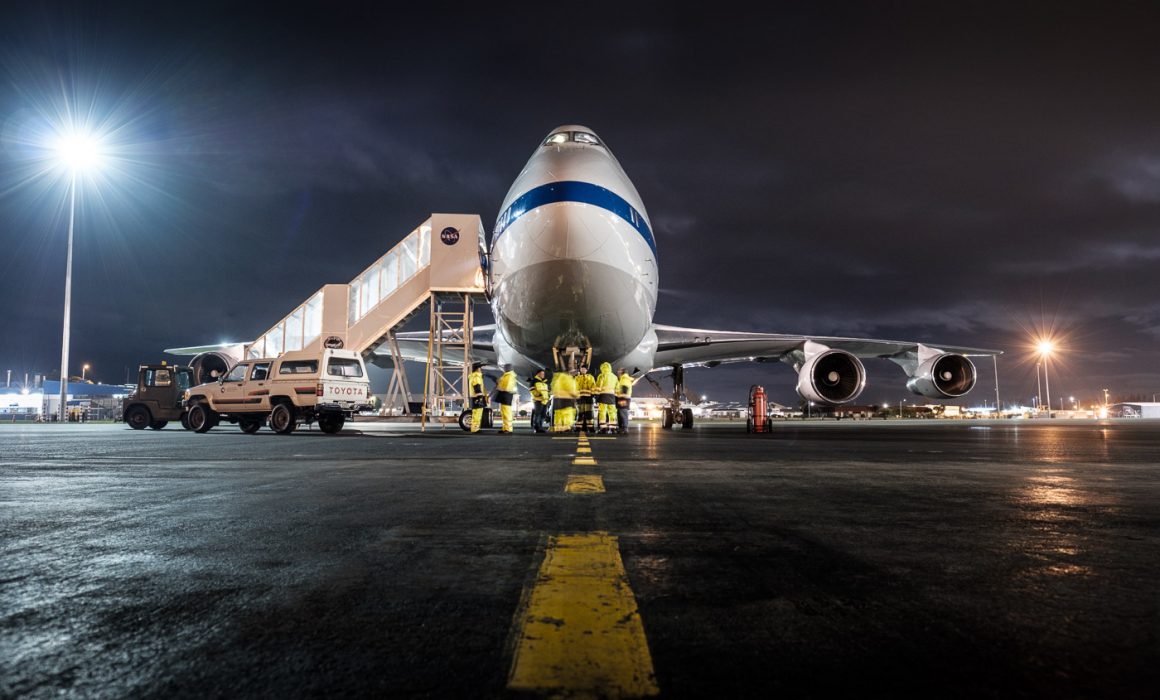 The Earth’s atmosphere is an ocean of water vapour. To the frustration of astronomers, this moisture in our atmosphere impedes observations of stellar objects in the infrared range of the electromagnetic spectrum. Launching telescopes into space is one way to  ensure clear views, but it comes at a price. For instance, the 1980s instrumentation aboard the Hubble space telescope cannot easily be updated because it flies around the Earth at 8 kilometres per second. Another example is the Spitzer and WISE telescopes suffering a limited lifetime due to their small supply of cryogenic coolant. 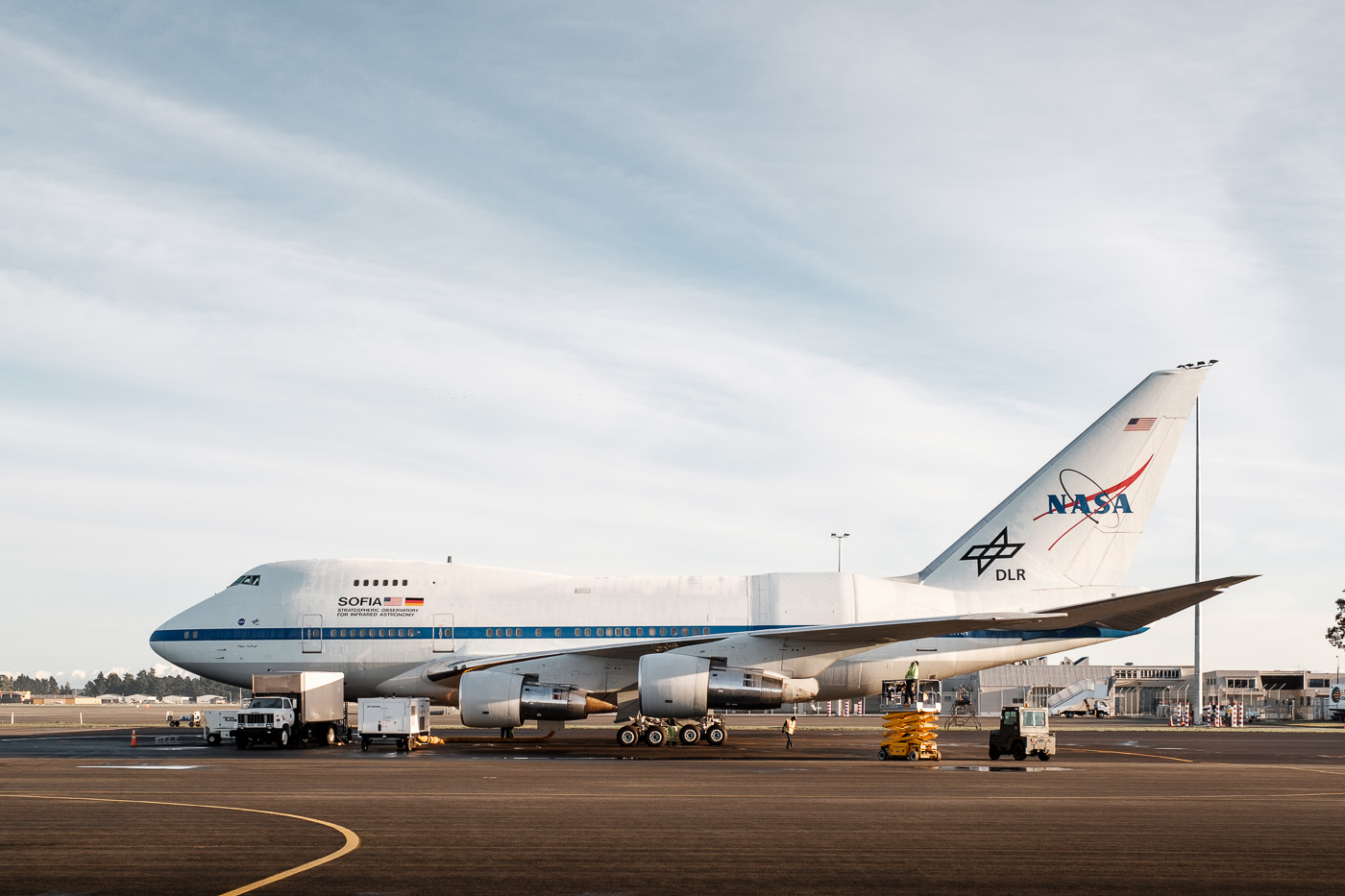 To overcome the maintenance challenges of orbiting satellites, NASA decided to team up with the German Aerospace Center (DLR). In cooperation with commercial partners they built an observatory that was both easy to upgrade and able to fly above most of Earth’s humid air. In 1997 work on the conversion of a giant Boeing 747SP, the Clipper Lindbergh, started. Clipper Lindbergh had started its commercial life at Pan Am and spent the last years before its conversion flying for United Airlines.

NASA and DLR faced many challenges when designing a gimbal mechanism that would keep the 2.5 metre mirror steady in flight. Smaller telescopes had taken to the air before, but nothing of SOFIA’s scale had ever been attempted before. After a gruelling development period of 13 years, SOFIA took to the skies on its first scientific flight in 2010.

It is deep winter in New Zealand when I am guided towards an upcycled Lufthansa business class seat aboard SOFIA. Out of a team of 126 on its annual visit to New Zealand, only a small group of around 20 flight staff, engineers, scientists and members of the media will take to the cold, and more importantly dry, winter air that night. 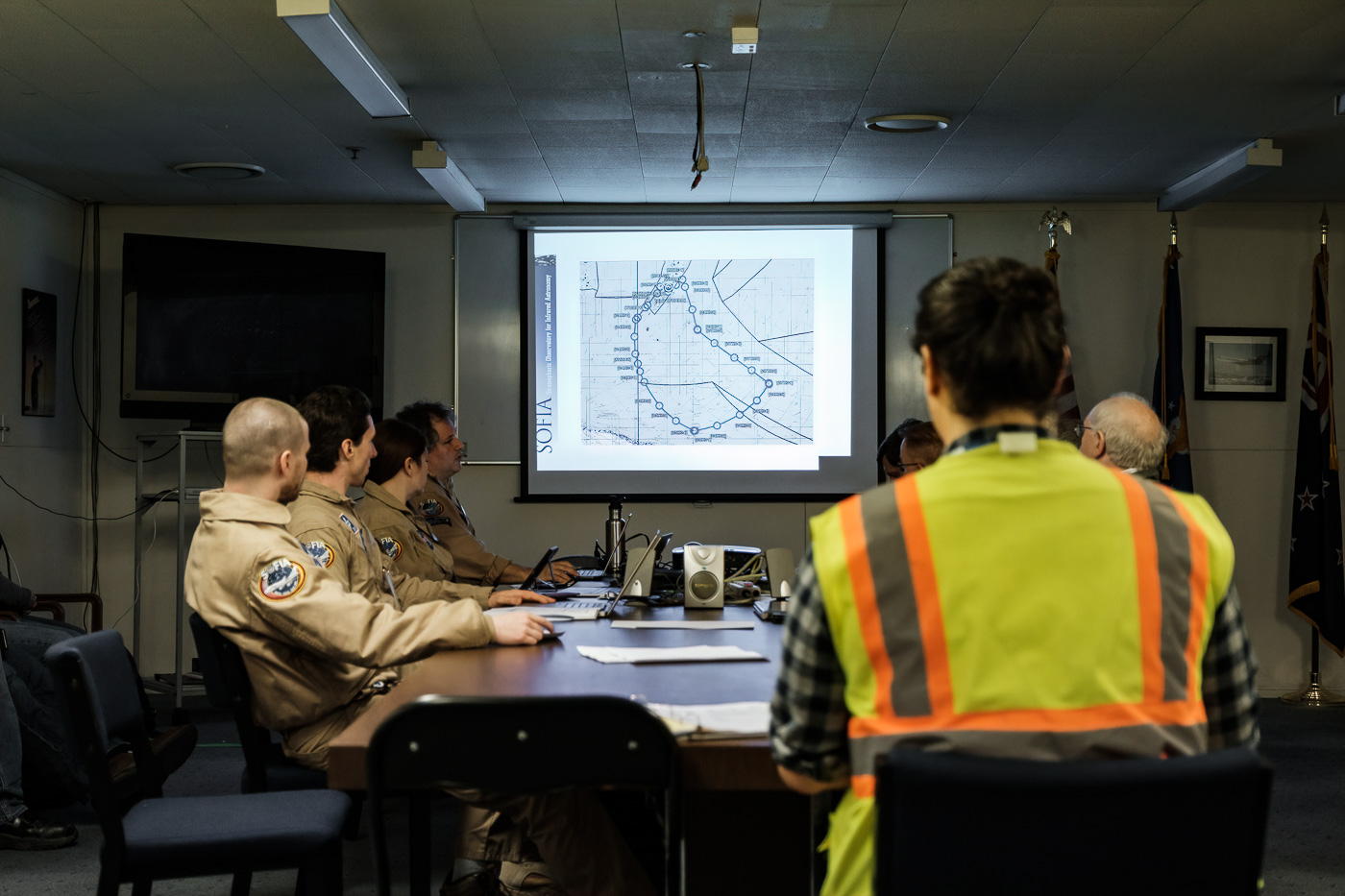 Our evening began hours before with a series of mission and safety briefings. Clipper Lindbergh will take us far away from commercial flight routes. Our induction into the dos and don’ts aboard ends in how to handle various equipment like survival suits for the cold Antarctic Sea and emergency oxygen masks. It dawns on me how hostile a place I am heading for. 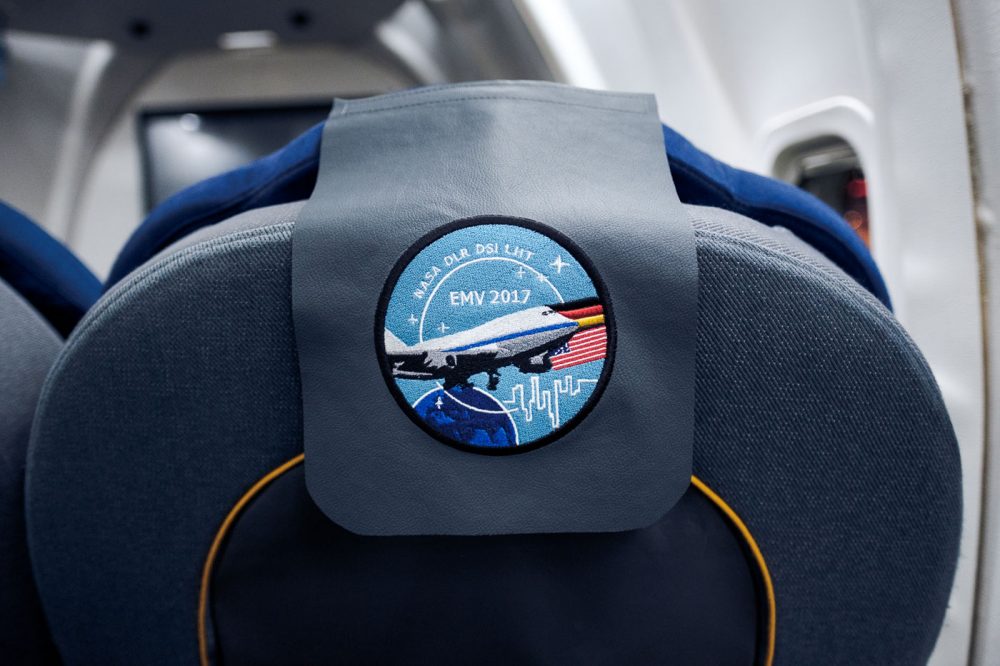 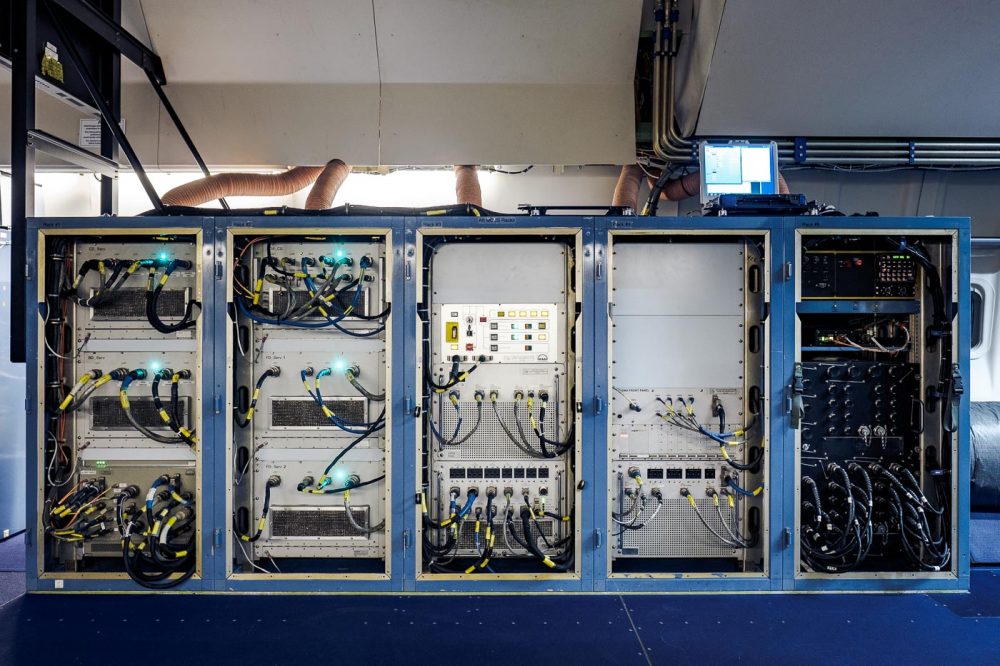 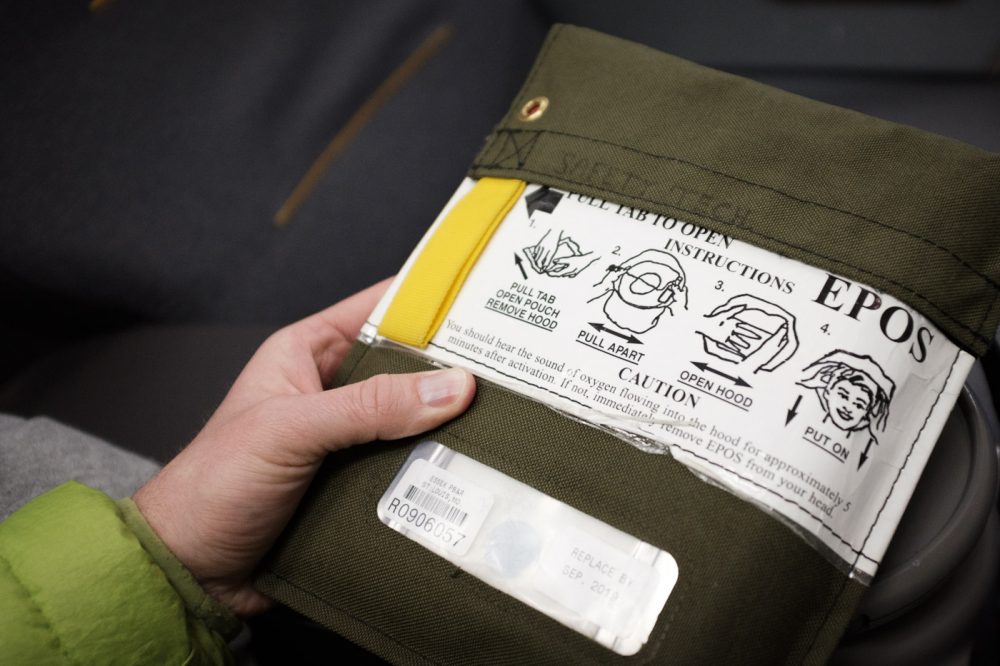 As the engines are spinning up, I have a look around the disjointed flight deck. My side of the aisle could almost pass for a standard airliner cabin, were it not for the floor-to-ceiling equipment cabinets that I share a row with. Next to me, Lead Avionics Engineer John Spooner is tracking a communications issue that prevents communication between lower deck and cockpit. On a flight where the Earth’s rotation in relation to planets and stars dictates a minute-by-minute flight plan, communications between scientists and pilots can make or break a mission. 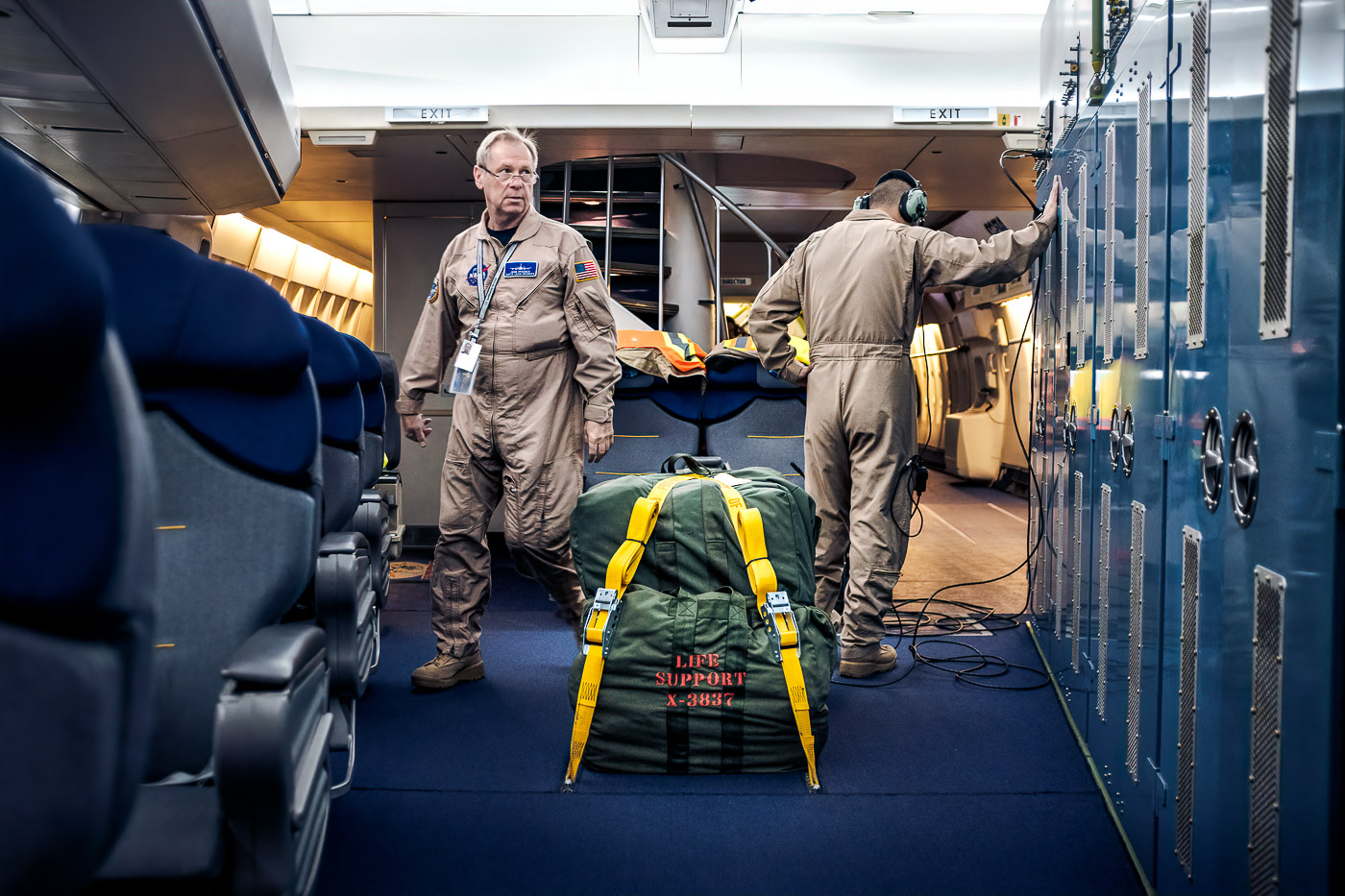 Our flight is about to be postponed by a day when the team of flight engineers and avionics technicians finally track down and resolve the issue. Later I will be told that I might have been the only concerned passenger on board. It takes a lot more to unsettle these veterans of experimental flight and space research than a few broken headsets. 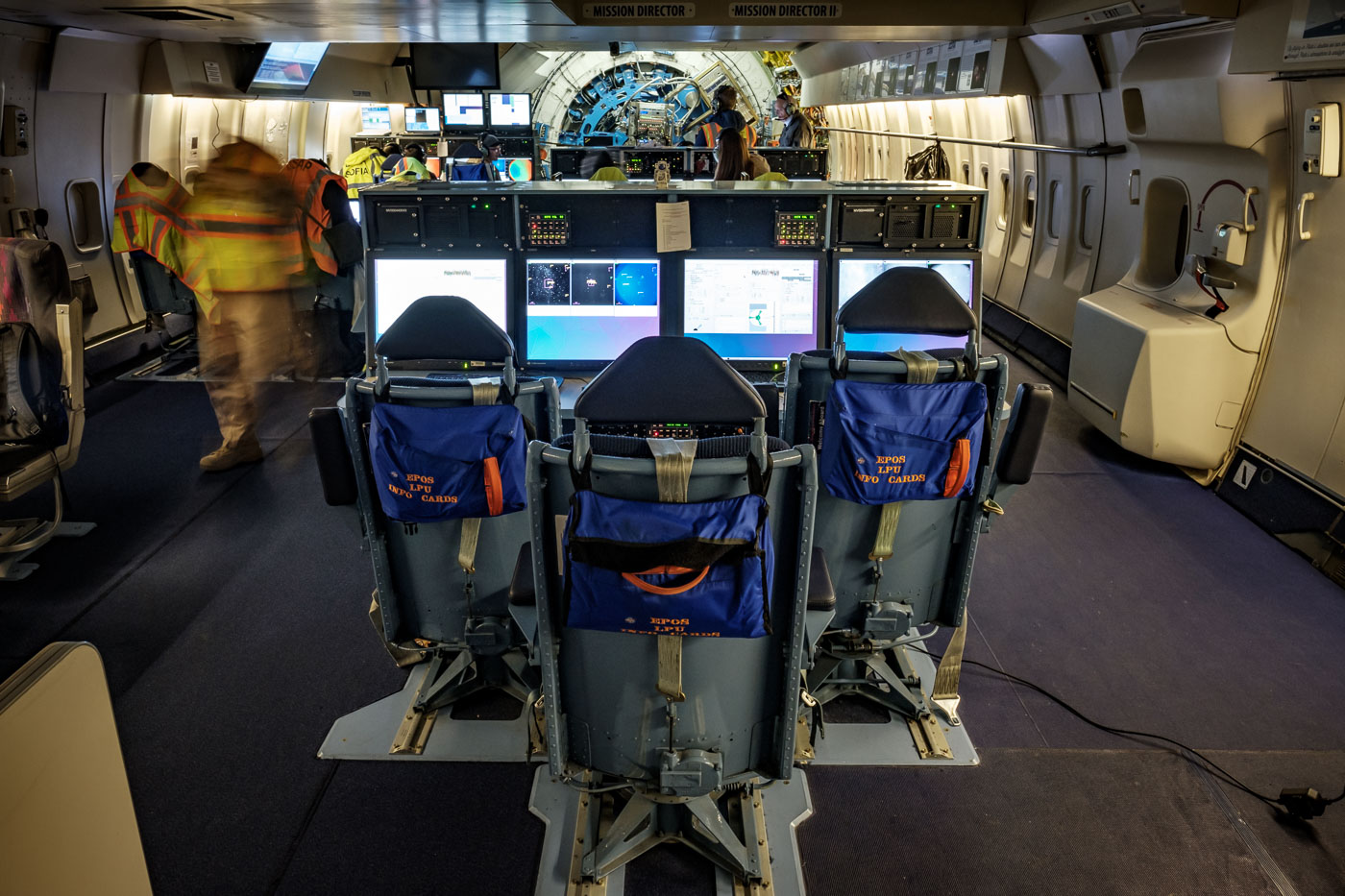 When we reach our initial cruise altitude of 35,000 feet, the seatbelt signs come off. With every step I take towards the rear of the plane, the interior design becomes more rustic. Behind the iconic 747 spiral staircase, I enter the hallowed halls of science in progress. Crude consoles and seats that could have been salvaged from a cold war-era bomber are bolted to the floor. 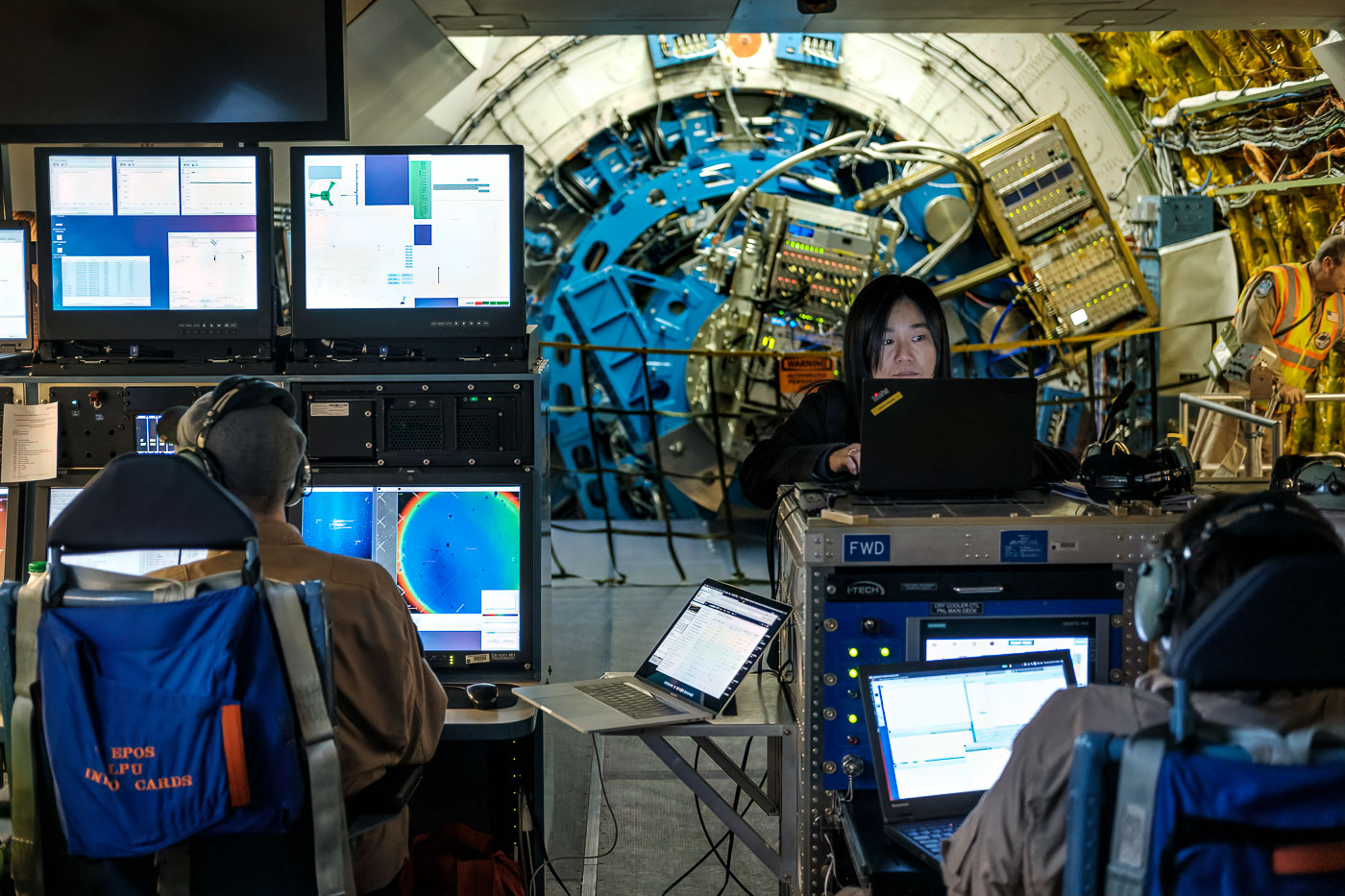 In places, the walls have been stripped of their beige panels to expose the underlying layer of yellow insulation and fuselage. These thin layers of foam and aluminium are all that stands between the aircraft’s human cargo and exterior temperatures of -70°C. At the aft end of the cabin, the pressurized side of the telescope silently rolls in its massive blue gimbal. 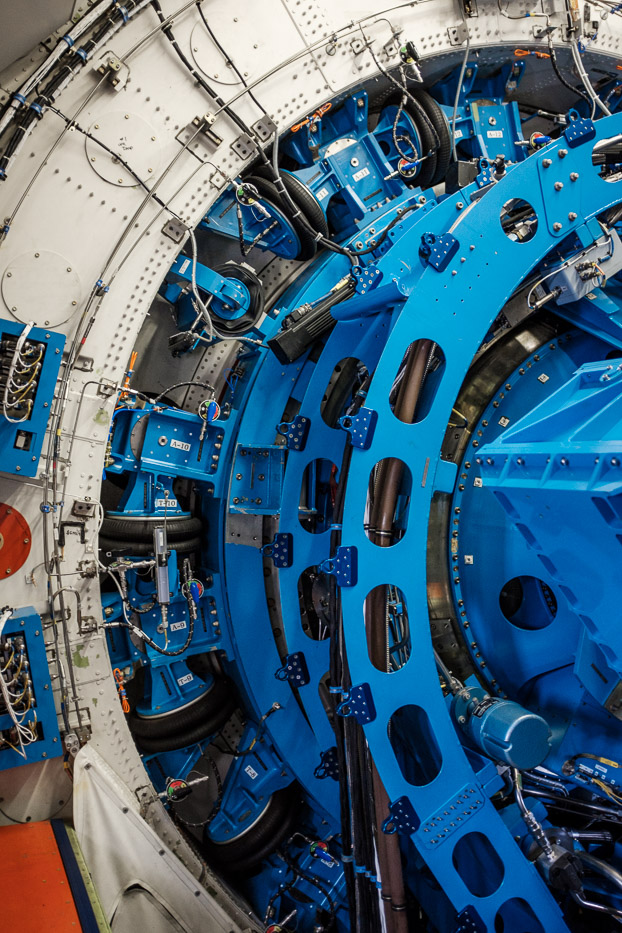 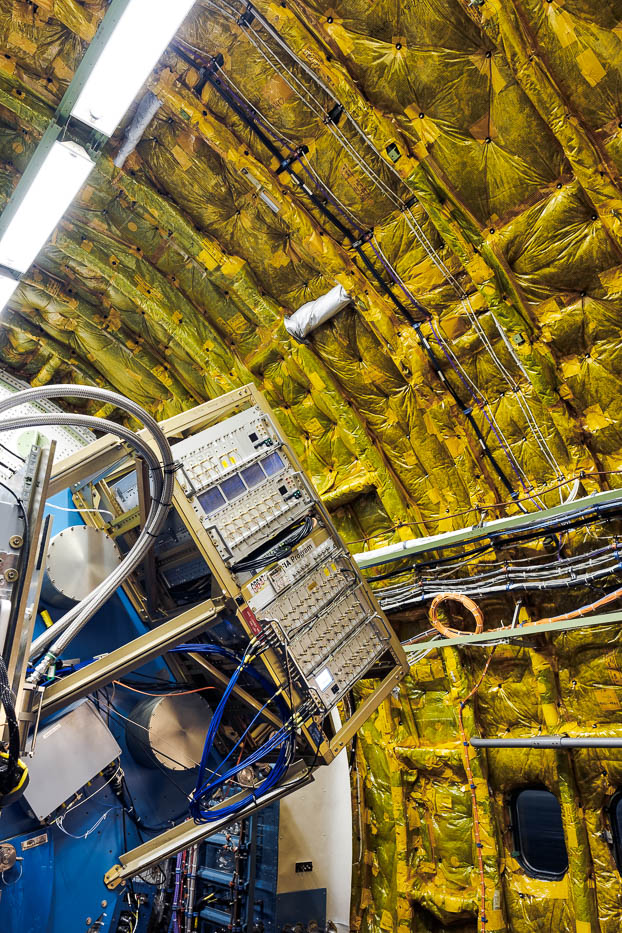 This gimbal is the domain of Instrument Scientist Enrique Lopez Rodriguez who I meet a few days after my flight. A native of the Canary Island of Tenerife, Rodriguez was born into a life of astronomy. The islands off the western coast of Africa are to Europe what the observatories of Hawaii are to the United States, a high-altitude vantage point to stars unencumbered by light pollution. 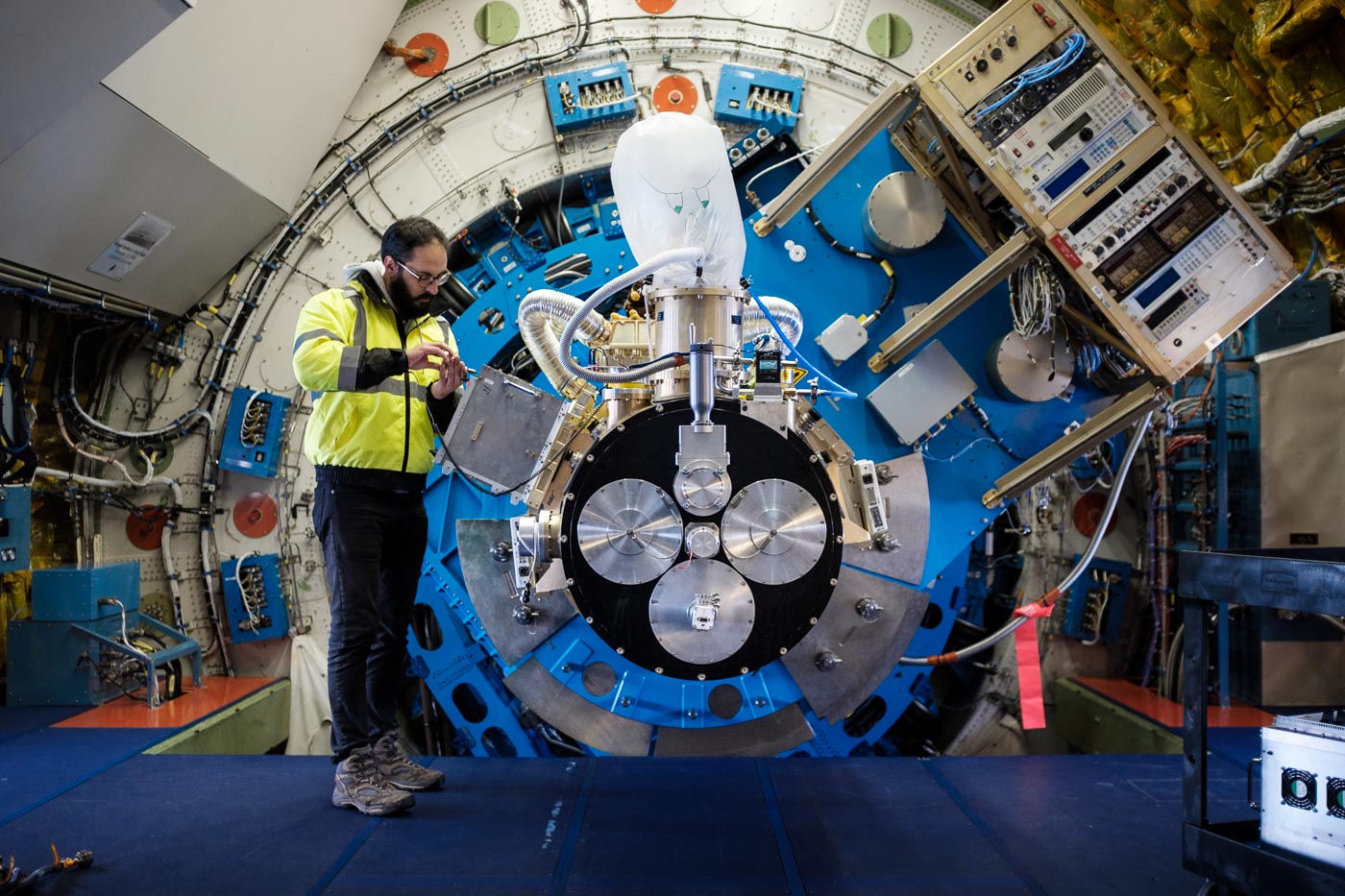 His career has since taken him from the island of La Palma to the United States, where he is part of the HAWC+ team at the University of Texas. Rodriguez installs a controller module that translates commands between the telescope hardware and a standard computer.

The High-Resolution Airborne Wideband Camera Plus will allow scientists to gain insight into the shape of magnetic fields around forming stars. The protoplanetary disk around these stars is rich in electrically charged dust particles that  align themselves along the magnetic field lines of their primary. HAWC+ uses polarization filters (like in some sunglasses) to deduct the orientation of these dust particles by looking at how they reflect light. That, in turn, provides insights into the overall shape of the star’s magnetic field.

On to Part 2: Aurora Australis